Galileo constructed the thermometer in the 16th century.
A galileithermometer is a thermometer in the form of a closed glass cylinder in which there is a transparent liquid hydrocarbon and various (often colored) glass bubbles. He is named after Galileo Galilei. At a temperature change the bubbles go up or down. Each weight has its own characteristic temperature at which it begins to float in the liquid.

Then came Torricelli’s invention of the barometer in 1643.
He did experiments with tubes filled with mercury and could show that something like a vacuum indeed arose. This was outright unheard of in his time, because Aristotle had claimed that a vacuum involved a logical contradiction. Torricelli stood at the cradle of a number of branches of science, including meteorology. He also devised Torricelli’s law.

The relationship between air pressure and altitude was demonstrated by Blaise Pascal and René Descartes. 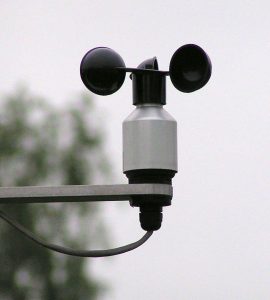 The anemometer for measuring wind speeds was built in 1667 by Robert Hooke.
Horace de Saussure made the list of important meteorological instruments in 1780 complete with the invention of the hygrometer, which measures the air humidity.

Wind speed and wind direction
An instrument that measures the wind speed (in m / s, knots, km / h, mph) is called an anemometer. This comes from the Ancient Greek ανεμος, which means wind. The wind speed meters can be divided into different types: the cup anemometer, the propellor anemometer and the ultrasonic anemometer are the most important types of anemometers. In addition, the wind speed of distance can be measured with a radar. Furthermore there are hand anemometers and fixed anemometers.

Air pressure
The air pressure is measured with a barometer. Most modern barometers contain a virtually empty box that, depending on the pressure, is pushed more or less (box of Vidi). Pressing the case to a greater or lesser extent results in a displacement of a pointer attached thereto which is transferred to a dial, on which the air pressure can be read. Many barometers in the house use this principle. read more ….